During the extensive seven-month research stage of Crab Decks & Tiki Bars of the Chesapeake Bay, Bill 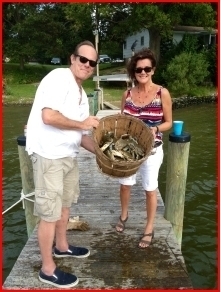 and Susan Wade estimate they consumed about 11 gallons of crab soup, 300 oysters, 85 crab cakes, 40 pounds of mussels, 25 rockfish, 200 steamed shrimp, and an undisclosed amount of beer, rum, and chardonnay.

It was a tough job but someone had to do it.

The Wades live in Washington, D.C. with their two sons. The first travel guide, Crab Decks & Tiki Bars of the Chesapeake Bay, sold thousands of copies across the mid-Atlantic. On the heels of that success, they published a book about Virginia's part of the Bay and a new update on Maryland. Both Bill and Susan have 20+ years experience in the publishing industry.

They hope to make enough money on these books to buy a boat.

Bill Wade was born and raised in Maryland. His father is a former D.C. fire fighter who hadn't 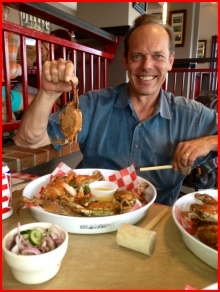 planned to become a waterman — until Bill's mom entered a jingle-writing contest at a Wheaton car dealership and won a boat. Their wooden cabin cruiser called "Limey" was built on the Chesapeake Bay. They docked at Kent Narrows, and summers were spent cruising around remote coves of the Bay, catching crabs. 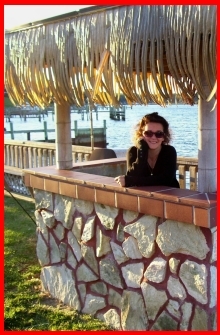 Susan Elnicki Wade grew up in Oil City, a small town in western Pennsylvania. She worked in restaurants in Pittsburgh, New York and Washington, D.C. Picking crabs doesn't come easy to her, and she leans more toward tiki. But after visiting every Maryland county along the Bay for almost two decades, she can whip up a mean batch of fried oysters and bake a respectable Smith Island Cake. Her recipes for crab pierogies and rum punch are absolutely legendary.