Labor Day might mark the official end of carefree summer days, but that doesn’t mean you have to throw in the towel on eating crabs. Sure, it’s time to pull on socks instead of a bathing suit and sit in a dull office cubical feeling like a crab trapped in a pot.

But if you’re stuck at work and can’t skip out to a Bay dock bar, there is a solution for getting outdoors and savoring a big bite of crab meat – look for crabs on wheels. 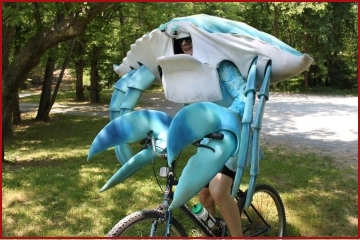 No, not this kind of mobile crustacean! I’m talking about food trucks. You’ve probably seen them parked around office buildings and construction sites. Colorful paint jobs and catchy names draw your eyes to their trucks and conjure up succulent images for your taste buds.

These culinary nomads free-range from curb to curb on city streets dishing up unique and ethnic cuisines. Food trucks are now the rage along the East and West coasts, growing to 3 million strong in the United States. And it’s not just about ice cream, hot dogs, and salty pretzels anymore. Behind the wheel you often meet seasoned chefs with creative ideas about seafood and a knack for delicious to-go dishes.

Today’s gastronomic gypsies are part of a long American tradition of open-air mobile dining. It began in 1866 on a cattle drive from Texas to New Mexico. A cattle herder named Charles Goodnight was charged with the task of feeding cowboys along the trail. He found an Army surplus wagon and customized it with shelves and storage areas for his supplies. After stocking the wagon with cooking utensils, beans, salted pork, and flour for biscuits, he prepared grub for his men where ever they roamed.

Goodnight’s chuck wagon concept spread like wildfire, and before long people from coast to coast were incorporating movable meals into everyday life. By the late 1800s, Night Lunch Wagons hit the streets in New York to fill the bellies of night shift workers. Sausage vendors stationed “dog wagons,” outside dorms at Yale, Harvard, and Princeton. In 1893, the anti-alcohol Church Temperance Society invested in meal wagons to lure men out of saloons. And during WWI, the U.S. Army used Mobile Canteens to bring the kitchen to the battle field for its troops.

Refrigeration and electricity helped bring about the modern age of food trucks. In 1936, Oscar Meyer unveiled its first hot dog truck shaped like an oversized wiener on wheels. By the 1950s, Good Humor and Mister Softee trucks were cruising neighborhoods tempting children out of their homes for ice cream.

Crabs on the Run

Today’s food trucks have evolved beyond snacks and food basics. Their menus often read like gourmet top hit lists, bringing every imaginable type of chow to the streets – including seafood from the Bay.

So, where do you go when you start dreaming about lump back fin and you need to step away from your computer? If you haven’t seen crabby food trucks in your area, check out two web sites with directories of mobile kitchens nationwide: Map Muse Food Truck Location find.mapmuse.com/interest/food-trucks and Mobile Cuisine Find Food Trucks mobile-cuisine.com/find-food-trucks. When you see ones that interest you, search for their web sites and on Facebook or Twitter to review daily menus and locations. 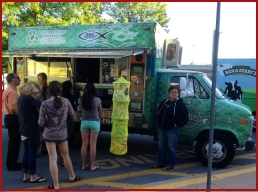 If you’re in Washington, DC, you’re in luck. The District’s streets are humming with vendors who are as single-minded about crabs as some of us. Feeling Crabby, Curbside Crab Cakes, Crab Cab and Go Fish live up to their names for serving authentic Bay dishes. To explore others in DC, go to Food Truck Fiesta www.foodtruckfiesta.com and The DC StrEATS www.thestreats.com.

Baltimore also has a nice array of food trucks with crabbitude. Some examples: WOLO (We Only Live Once) has crabby mac n’ cheese and gazpacho sprinkled with crab meat, and Charm City Café serves blue crab tostada. Cruisin’ Café endulges in crabby fries, Gypsy Queen makes a yummy crab taco and Crab Cone goes over the top with fries in a waffle cone covered with creamy crab dip.

So, don’t let the autumn crab-withdrawal blues get you down. Food trucks are waiting around the corner to give you a tasty dose of the Bay.