Beer riots in Baltimore … federal agents attacked with bricks and a jar of mayonnaise … bottles of moonshine stashed at the bottom of oyster bushels … These are just a few snapshots of the mayhem that ensued on the Chesapeake Bay during Prohibition.

On January 16, 1920, booze was banned in America. Beer, wine, champagne, rum and other distilled spirits became illegal. The Chesapeake Bay, along with the entire United States, checked in for a 13-year stint in rehab.

The 18th Amendment allowed a few exceptions. Places of worship could 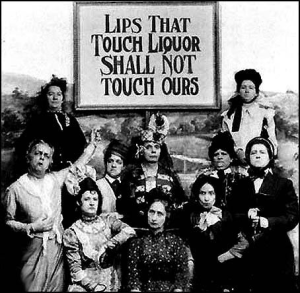 pour wine for religious ceremonies. You could stomp grapes in the bathtub and make wine at home, as long as you didn’t sell any of it. And if you felt sick, doctors could prescribe alcohol for “medicinal purposes” from liquor-dispensing pharmacies. This loophole grew so popular that by March 1920, 70,000 whiskey prescriptions in Maryland and DC were filled. Otherwise, happy hour was legally over.

The movement to make America sober was championed by the Women’s Christian Temperance Union (WCTU), Anti-Saloon League, Methodist ministers and others who blamed demon-rum for a menagerie of social ills.

For centuries, America’s tradition of drinking beer and wine seemed manageable, but the influx of hard liquor, such as bourbon from Kentucky and rum from the Caribbean, caused a dramatic spike in alcoholism in the 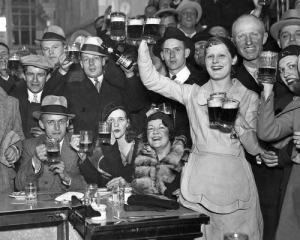 19th century. “Between 1800 and 1830, average annual intake was more than five gallons of hard stuff per American, a drinking level nearly three times that of late 20th century America. Foreigners visiting the United States … noted with disdain that the whole country seemed to be on a national binge,” says Eric Mills in Chesapeake Rumrunners of the Roaring Twenties.

Catch Me If You Can

Some people embraced a respite from rum. Others believed that the government had no business dictating morality or lifestyles, so they decided to fight for their right to party. The Chesapeake Bay’s 11,600 miles of shoreline – with all its remote coves and inlets – was a perfect setting for a cat-and-mouse game with Prohibition officers. When federal dry agents shut down saloons, speakeasies popped up all around the Bay.

Hundreds of moonshine stills appeared along the Eastern Shore, Southern Maryland and Virginia’s Tidewater region. White lightning and other intoxicating liquors were secretly brewed in the Chesapeake countryside. Some was kept for local consumption, but thousands of gallons of hooch were transported in fast cars to thirsty city dwellers in Richmond, Alexandria, Washington, Baltimore and Annapolis. It’s rumored that more than half of the Bay’s population joined the moonshine bonanza during Prohibition. 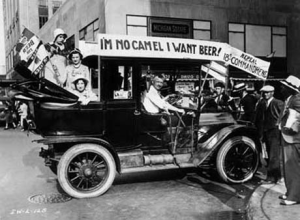 The home-grown booze industry paled in comparison to imports from abroad. Americans never lost their taste for French champagne, British gin, Caribbean rum, or Scotch whiskey, and foreign sympathizers gladly accommodated the wet wishes of a dry land. Ships from around the globe lined up along the Atlantic coastline from Virginia to New England, cautiously floating three miles offshore in international waters along a stretch called “Rum Row.” Sea vessels’ bellies were filled with cases of fine imports, and crews awaited small speedboats to transport the liquid gold to shore. When they made it through the mouth of the Bay, rumrunners disappeared amidst the isolated marshlands and hidden coves to unload their bounty.

Resourceful Chesapeake watermen souped up their engines to outrace the Coast Guard and rigged boats for carrying contraband. “At boatyards from Coan River to Colonial Beach, Smith Creek to Combs Creek … Bay boats were being built with extra cargo space, artfully hidden, for the burgeoning cottage industry of maritime liquor traffic,” says Mills. Fishermen hid Mason jars of booze in bushels under mounds of oysters or built false bottoms in boats to stash cases of hooch.

Even though Prohibition was the law of the land, the country was deeply divided over alcohol. Teetotalers heralded the Noble Experiment as the nation’s salvation. Others refused to hand over their martini shakers. Attitudes varied from state to state, and the differences were clearly illustrated in the Bay’s border states of Maryland and Virginia.

Along with 17 other states, Virginia went dry in 1916 and outlawed liquor sales four years before the rest of the country. Norfolk tried to stay wet, but the Old Dominion’s state legislature overruled the vote. Many taverns stayed open, because they didn’t feel the Federal enforcement pinch until the 18th Amendment was enacted nationwide. When the clock struck midnight on January 19, 1920, Norfolk’s streets were flooded with WCTU leaders and other anti-alcohol revelers celebrating their victory.

Almost 15,000 jubilant teetotalers joined a parade spearheaded by a flamboyant Evangelist preacher named Billy Sunday, who had fought against demon rum for decades. Sunday marched through the town next to a 20-foot long black coffin symbolizing the death of John Barleycorn. 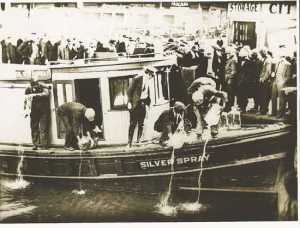 When the parade ended at a Methodist church, Sunday worked the crowd into a frenzy by jumping on top of the coffin, singing hymns and delivering a fire-and-brimstone sermon that rocked the rafters.

The next day, Virginia gave the official last call for alcohol. Norfolk’s 115 bars were closed. Saloon signs and billboards promoting booze were pulled down and destroyed. In a public show of force, police dismantled saloons, while bar owners packed up highball glasses, stools and fixtures and shipped them on boats to Baltimore.

Virginia would have its share of rumrunners, bootleggers, and speakeasies, but as far as the state was concerned, alcohol in the Commonwealth was dead.

Maryland was a horse of a different color. As a young colony, its leaders tried to curb alcohol consumption, and in 1642 public drunkenness was rewarded with a 100-pound bag of tobacco fine. But it changed its tune three centuries later. When Congress tried to impose national anti-alcohol rules, Marylanders replied with a collective “mind your own business.” It was the only state that refused to ratify Prohibition and allocate funds to enforce the new laws.

Simply stated: Maryland was defiantly wet. Resistance to Prohibition started at the top in Annapolis and trickled down to police forces and average citizens. Alfred Richie, the four-term governor from 1920 to 1935, wasn’t much of a drinker, but he believed the Federal government had overstepped its bounds and was stomping on his state’s rights. Nationally recognized for his anti-temperance views, he scoffed at squandering Maryland’s funds or backing the 18th Amendment just because the Feds wanted to eliminate booze. Law enforcement was lackluster at best. Tavern operators greased local policemen’s palms so they’d turn a blind eye to thriving booze businesses.

Baltimore, the wettest of all cities, became a hotbed for importing alcohol. Speakeasies flourished in every neighborhood. The Horse You Came in On Saloon, which is still serving spirits in Fells Point, boasts that it continuously operated before, during and after Prohibition. “The Horse was located next door to an alcohol-dispensing pharmacy back then,” says General Manager, Trent O’Connor. “After people picked up their ‘medicinal’ Jack Daniels at the drug store, they’d walk through a secret door into our 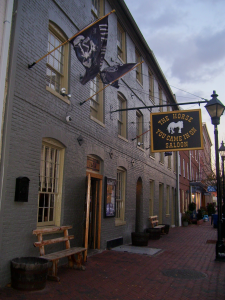 speakeasy for more liquid refreshment.” John Stevens Restaurant, just a few blocks away, has been a favorite watering hole for sailors and watermen since the early 1800s. It stayed open throughout Prohibition by selling oysters and serving “soft drinks” to parched patrons.

Baltimore citizens were especially prickly toward Prohibition agents and infamous for disrupting enforcement efforts. A New York Times headline from March 1927 reported “MOB IN BALTIMORE ATTACKS DRY AGENTS: Crowd of 500 Wields Axes on Autos and Hurls Bricks at 16 Federal Men on Raid.” A rowdy South Baltimore crowd swarmed the officers’ cars, but no one was injured or arrested. “Only three agents were struck — two by stones and one by a jar of mayonnaise which broke and injured chiefly his personal appearance.”

A few years earlier, a beer riot had erupted when three federal agents tried to transfer 200 cases of beer from a freight car at a B&O Railroad warehouse into two police trucks. An irate group of 1,000 Baltimoreans descended on the scene and made off with one of the trucks – filled with sudsy treats for their family and friends.

While Baltimore’s resistance to Prohibition took on a unique flair, the entire country shared its concerns about this great social experiment. Corruption had run rampant across the nation, and a sharp rise in alcohol consumption indicated that American temperance was a flop. The 18th Amendment was repealed on December 5, 1933 – just in time for Christmas festivities. America resumed its bottoms-up traditions, and Chesapeake watermen went back to carrying crabs and oysters in their boats.

During Prohibition, Americans were divided between dry and wet lifestyles. Some teetotaling housewives shared alcohol-free recipes, such as the unthinkable marinara sauce without red wine. Scofflaws and other rule breakers invented delectable cocktails that are still worth sipping today. Here are three of the era’s popular libations and the story behind their creation: 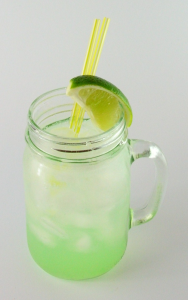 Gin was among the favorite intoxicating liquors. Chicago bootlegger Al Capone liked to drink a cool concoction of gin, lime, fresh mint and simple syrup, called The Southside. Franklin Roosevelt celebrated the repeal of the 18th Amendment with a Dirty Gin Martini. The Gin Rickey was first made in the 1880s with bourbon at Shoomaker’s Bar in Washington, DC, and was named after Democrat lobbyist Colonel Joe Rickey. During Prohibition, bartenders replaced bourbon with gin. While F. Scott Fitzgerald was writing the Great Gatsby, he found inspiration in this crisp cocktail. Imagine it in a tall highball glass poised next to his typewriter. 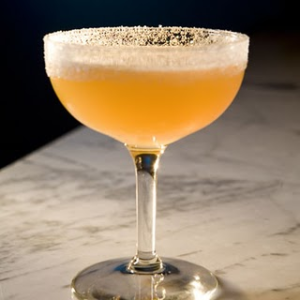 During Prohibition, outrageous was the norm, and normal was so old-fashioned. Everyone wanted to make a splash when they headed out for a night on the town and The Sidecar epitomizes a grand entrance at a gin joint. It’s named after a WWI army captain who liked to arrive at his local speakeasy in a motorcycle sidecar. Bet he also puffed on a Cuban cigar. Shake this mixture well with cracked ice and strain into a chilled, sugar-rimmed cocktail glass. 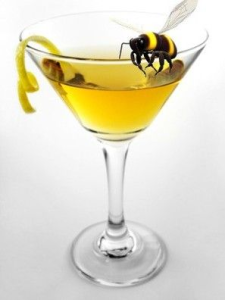 The Roaring ‘20s gave birth to a host of phrases that toasted the wild side of nature. Being the “cat’s meow” meant you knew how to make the ladies purr. Having “ants in your pants” suggested that a nip from the flask might help settle your mood. But the superlative “bee’s knees” was reserved for flappers and dappers who had reached the height of excellence – and mixed a little sting with their charm. Be sure to shake well with ice and serve in a chilled glass.